Aesthetically pleasing, yet far from my favourite laksa in Katong.
It's been years since I last ate here. For some reason decided to give it a try after my MRI scan.
The stall's still the same, and I had my usual two bowls of small ($4.50), one otah ($1.20), and two cans of ILT ($2.80) at the aircon sitting area.
The reason why I lost favour in the 328 laksa was due to the dilution of the laksa broth. Probably a victim of its own success, the laksa broth used to be so thick and flavourful.
Now the laksa tastes worse than it looks (although it does look quite presentable!), the noodles arn't cut enough so it's harder to scoop with the spoon, less prawns, and of course the laksa tastes somewhat diluted.
It's not to say that the whole meal was terrible though, in fact I can see why some people prefer this version of Katong laksa compared to the others. It's one of the priciest too!
Also it's location is far more attractive than my favourite Janggut laksa right across the road. It was far more crowded and there were even crowds of tourists coming to try it. Oh and the staff of ah bengs are still generally quite rude. They really could have worked on that cause I remember a very nice older ah beng uncle but I didn't see him there today. 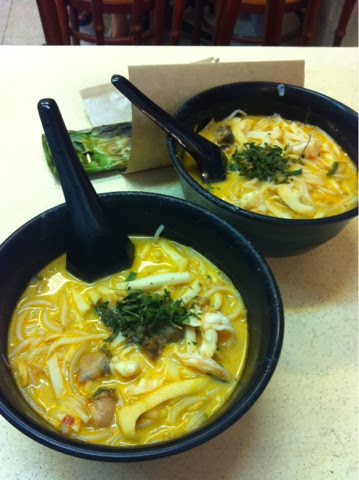 Posted by cylum at 1:40 PM
Email ThisBlogThis!Share to TwitterShare to FacebookShare to Pinterest
Labels: Food, Singapore