It is time for a family holiday again!

This time around, we wanted something cheaper and less strenuous since we were just in Copenhagen in September!

In the end we chose Phuket because we found an SQ promotion to fly all four of us for only $800! After deducting my Frequent Flyer miles, the flights only cost me $500. I decided to splurge on the hotel, so we chose the Le Meridien Phuket. It had good reviews and was very well recommended. This cost about $270 per night with the strong Baht in play.

The day of the trip I even felt a little unprepared for what was to come because I never really planned anything.

Phuket was like the sort of place you'd just fly there and then play everything by ear. It so it proved to be!

So we flew at around 2.30pm and arrived at around 4pm.

On touchdown, it was drizzling, which made my heart sink. The wifey and I were monitoring the weather in Phuket the last two weeks and because it was raining so much in Singapore, it was sad to see that expected weather in Phuket for the whole week we were going to be there was going to be thunderstormy and wet. So seeing upon reaching that it was indeed raining, made me sad. I had secretly prayed and wished that we had better weather that went against these robotic online weather predictions.

We took a public taxi from the Phuket International Airport, which cost me about 1,200 baht. This was like $60! So expensive but apparently the standard rate. Le Meridien was in in Karon Beach which was near Patong, and about 90 minutes drive away. So far!

As we weaved through rainy traffic, the sun set and it got dark. It made the whole mood for the trip rather downy for me. Who knew this would be the low point and things were looking up from here on! Jason Mraz's Have It All really meant it when he sang "May the best your todays be the worst of your tomorrows!"

We finally reached the hotel and boy was it grand. Le Meridien occupied the foothill of a hill after Patong and it was in its own exclusive ravine leading out to its own beach. So exclusive! And given the expanse of the resort, it literally occupied the whole beach from one end to the other. This was where we were going to be staying for six days! Wow! Things were really looking up!

We checked in to an upgraded room thanks to my Marriott Bonvoy membership and it had a really nice view of the resort. The room coulve've been bigger, but I think the wifey was suitably impressed enough that I was happy.

Dinner was out of convenience at one of the resort's international restaurants with an international buffet. It wasn't cheap but we were tired from the flight and it was getting late already. As it was a Sunday, the restaurant had a long dance performance for guests.

And after that, there was a hotel party at the beach. It was nice to have an exclusive beach all to hotel guests only with hardly any possibility of the public encroaching on it. This left the whole area very serene and exclusive.

As I stood on the fine sandy beach in the night looking out at the dark horizon with only starlight and the lights from ships far out at sea, I got excited about what the rest of the days would bring. 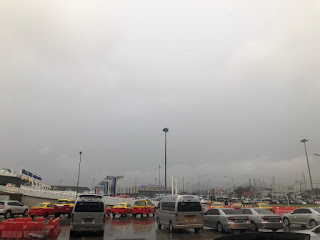 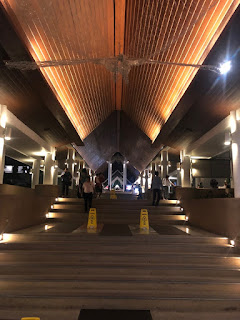 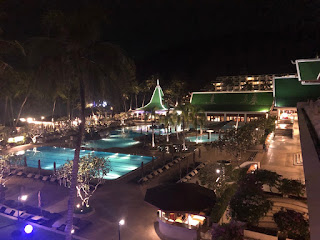 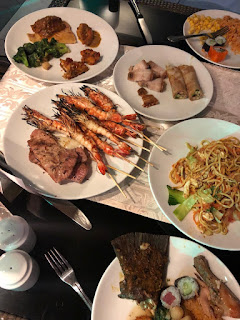 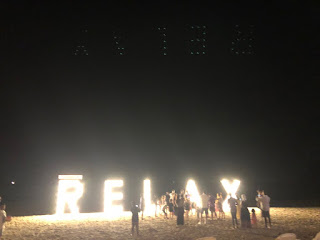 Posted by cylum at 3:05 PM
Email ThisBlogThis!Share to TwitterShare to FacebookShare to Pinterest
Labels: Travel