I did it. I finally accomplished something of sporting significance since my full ACL reconstruction some three years ago.

So proud of myself.

Going into the race this morning I really felt quite unprepared. My last run was a week ago and I struggled having been hit by a bout of flu late last week.

By the time I woke up at 3am this morning, I was high on adrenaline and I was pleasantly surprised that Man United were leading Arsenal 3-1 away at the Emirates. Definitely a good sign, I thought.

So I got a taxi and as we drove into the city, we saw the massive jams due to the road closures. In the end I had to drop outside the One George Street building and had to walk/jog from there. Talk about an intense warm up.

Still I managed to get to my starting pen early. Even if it was all the way at Ion Orchard. Almost 4km away. Many other runners were affected by the jams as well.

Flag off was very organized, even though we waited in the pen for more than half an hour. The wait was so long that by he time I was flagged off, I really needed to pee.

And so from flag off at Somerset 313, I hunted for the first available toilets. Turned out that it was fairly near, at the YMCA at Dhoby Ghaut. After that the rest of the city leg was beautiful. SCMS is really very well organized and the entire roads were closed for the runners, so there were minimal clogs and choke points.

By the time I was at the 11km mark, we had reached Raffles Place. I was actually having a very good run, beyond my own expectations. Thankfully I listened to the wifey and tried to run slower instead of cheonging.

It watually the 16km mark that things began to fall apart for me, firstly my Bluetooth headphones ran out of batteries! OMG can? Then we had to run up Benjamin Sheares bridge which was extremely tough, and of course my legs were jelly by then.

My wife also started messaging on WhatsApp that I had to jiayouz othherwise the bus of shame would come sweep me up.

In the end I walked a km, jogged a km for the final 5km, which probably cost me a full hour.

When I reached the finish line at the Padang, there was more a sense of relief than anything, knowing that I completed something so significant.

Still hoping to complete the full marathon next year. Will definitely need to train for that one,

So proud of myself. 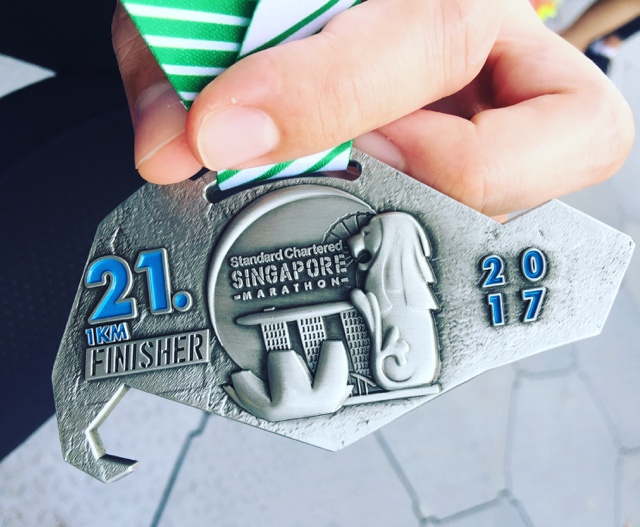 Posted by cylum at 11:22 PM
Email ThisBlogThis!Share to TwitterShare to FacebookShare to Pinterest
Labels: Running