Twice.
Dramatic as it may sound, I did. Thankfully we were close by to make sure we could step in if anything untoward happened.
'Twas just another kindergarten friend's birthday party and this time it was a pretty massive one with pool time included.
The condo pool was pretty cool with a 0.5m kids pool with slide and a 1m kids pool on the opposite end.
The kids set out to play in the 1m pool. Most 6 year olds in the boy's class could swim pretty well, so I'm glad my boy could handle himself pretty competently. 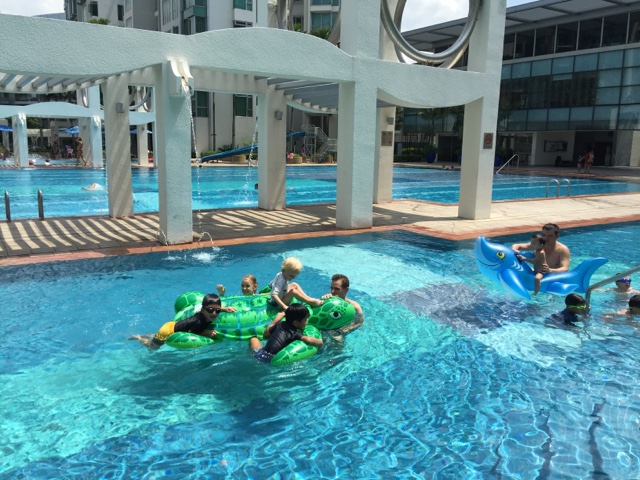 Turtle power! The boy is hugging the right  front flipper.
The girl on the other hand still hadn't even learned to dip her head in the water, yet was eager to join all the other older kids having so much fun.
She latched herself tightly on the head of the turtle float and held on to the two handles firmly. But older kids will frenziedly pile onto any flotation toy that came close. And so it was that when 3 kids simultaneously leapt onto the giant turtle, it flipped. 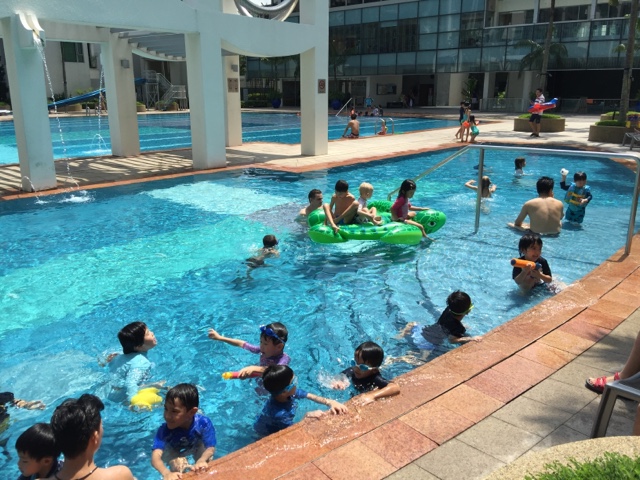 That's my girl at the turtle's head.
I was on hand right at the pool side when it first happened. So I could even calmly remove my slippers and walk into the pool knee-deep (it was a sloppy pool type) while she was struggling to keep her head above water and frantically grabbing at anything. By the time I pulled her out she had already had a few gulps of water, but nothing really serious. Yet she wailed like the greatest hurt on earth was upon her. I calmed her down and brought her to mummy, enjoying a drink in the shade.
After the attention was all gone and she'd calmed down, the girl staged a revival of enthusiasm and ran back to the pool to play with everyone again. Guess quietly sobbing in mummy's arm was not much fun for any attention seeker.
The second time it happened, same setup, still determined to head the damn turtle. Even had the confidence to give several shouts of 'Look at me, papa!', from the distance. By now I sort of had an inclination that I needed to be prepared for round two, this time removing all contents in my pockets, slippers also removed.
As expected, a minor flip took place, but a sharp-eyed parent (Jared's daddy - bless his heart) had grabbed her before her head dipped into the water. I was startled enough to get of my deck chair, but thankfully no need to get into the water, or so I thought. Even waved a manly salute to said parent who helped the girl.
Then just shortly after, the turtle came nearer, at which point the 6yr olds started leaping onto it via the perimeter of the pool. Usually one or even two kids leaping full body wouldn't cause too much trouble for the massive turtle float, but somehow there was so much tugging and jostling for space on the turtle's back that it took one boy's perimeter jump to cause the turtle to flip.
This time around the turtle did a 180, and  my girl went full under. I leapt out of my deck chair and charged straight in. Yet my first foot's entrance into the water met the slippery tiles along the sloppy ridge and I slipped and fell on my bum. Thankfully I calmly got up right away and wading in time to get to my poor girl who by now was grasping at straws, drinking water by the mouthfuls.
It took her awhile to calm down, before she went into wail mode again. This time around probably more traumatized, as she had drank loads.
Thankfully she was safe and sound, even if I was soaking wet from the torso down, and she, a wailing truck. In fact by the time I got home, my son saw that my boxers that I was wearing when I slipped, had ripped right down my entire butt line! Think I even sprained my pinkie when I fell :(
All in, there really wasn't that much danger of her drowning, given the proximity of so many adults looking on. Yet I know that this was an experience for my little one she would never forget, and hopefully she will learn from the trauma.
As a parent, I am even more adamant that my kids need to learn to swim as soon as possible.
Glad to have been my daughter's hero.
God bless.
Posted by cylum at 3:48 PM
Email ThisBlogThis!Share to TwitterShare to FacebookShare to Pinterest
Labels: Home