The Hell That Was Horizon Hills

Spent the whole day in JB yesterday at Horizon Hills Golf and Country Club with some of the company people. We're sussing the course out so that we're more familiar with it when we play again next week in that Texas Scramble tournament.

My oh my was the course tough or what. I think it's one of the toughest course I've played so far. We got very well acquainted with the sand bunkers. They look like wide open mouths trying to swallow up your ball all the time. They're really deep and really steep facing the holes. Eugene even put on a "Bunker Show" for us when he was stuck in one for 6 strokes. Haha. The fairways were also really narrow and there were alot alot alot of water bodies. Think I lost a total of 9 or 10 balls. Haiz. Need to stock up against before next weekend.

In the end, I scored a 119, Eugene got 116 and even Lasse who had an ok game could only manage a 94. So that shows how tough the course was.

Yet, as challenging as the course was, we actually had lotsa fun! Somehow it was very exciting and inspiring at the end of some of the holes, to know that you survived and didn't double-par it! Haha.

Oh and you gotta click on the scorecard to enlarge it. 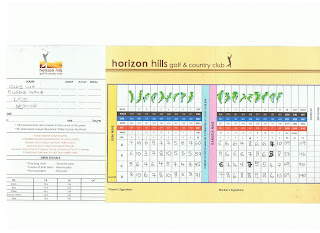 Posted by cylum at 3:35 PM
Email ThisBlogThis!Share to TwitterShare to FacebookShare to Pinterest
Labels: Other Sports, Travel