Was at The Arts House, which was also the old Parliament House last night attending the CFA Singapore Charter Annual Forecast dinner.

The event was actually held in The Chambers where the old parliamentary debates used to take place. Such a storied and fabled setting. Plus as sponsors, we got to sit in the front row which was where the Ministers used to sit.

And I actually got to sit at where our ex-deputy Prime Minister, Dr Toh Chin Chye used to sit, right beside where Lee Kuan Yew used to sit. Darn it, should've taken LKY's seat when I had the chance! 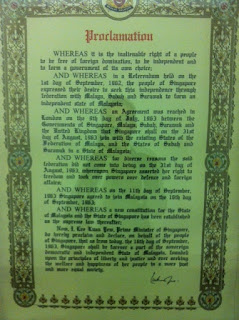 One of the old Proclamation of Independence from the British, signed by LKY in 1963. 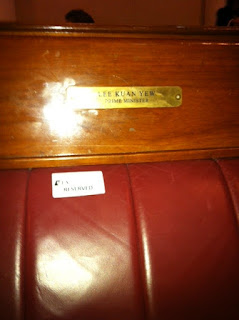 Don't play play! The old man really used to sit here! My seat was right beside. 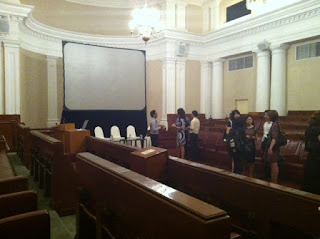 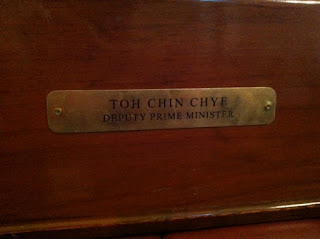 Something about hanging out with CFAs that makes me feel really small. Its like some prestigious club of psyched up we're-smarter-than-the-rest-of-the-world peeps who probably won't talk to the common man on the street. Elites. I wanna join!

Then again considering the 70% failure rate of the full CFA course, I guess there is a certain unspoken pride in being part of the brainiest financial minds in the world.
Posted by cylum at 4:02 PM
Email ThisBlogThis!Share to TwitterShare to FacebookShare to Pinterest
Labels: Singapore, Travel