Apollo Char Kuay Teow is back because Marine Parade Central food center is now open again after its renovation!

The portions are so small, the food at the food center has gotten a tad more expensive, and worst of all they've invented this new tray return system which looks like it was thought of by someone who's never eaten in a food center before.

You're supposed to pay 50c deposit for a tray and then claim it back when you return it later to encourage people to return their trays and bowls. My first trip since the food center reopened and immediately I can tell this is going to fail because no one wants to put 50c deposit just to use the tray. So everyone is going to take the bowls and plates by hand and then not return anything. 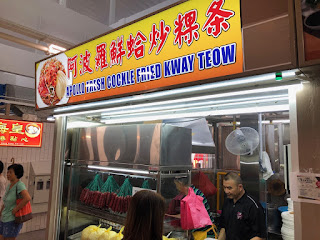 Posted by cylum at 10:54 PM
Email ThisBlogThis!Share to TwitterShare to FacebookShare to Pinterest
Labels: Food