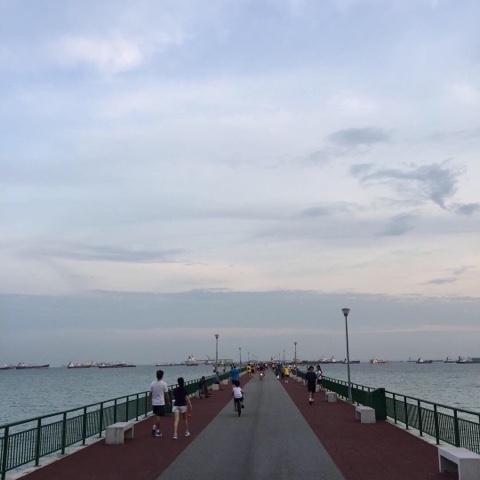 Last Monday I left straight home after work to pick my son early.

The wifey would normally do so but she needed to stay late for work.

After picking him I asked what he felt like doing and he said he wanted to go cycling.

So we decided to let him cycle as far as he wanted over at East Coast Park, while I ran alongside him for as far as I could.

As you can see, we made it all the way to Bedok Jetty.

Which is quite a feat.

Both for him and for me.

The running route to Bedok Jetty vs the cycling is slightly different, a wee bit longer as it snakes around the Lagoon food centre.

Then we headed back to Lagoon and ate my favourite duck rice and had sugar cane juice for dinner.

A nice evening out for father and son.
Posted by cylum at 12:29 AM
Email ThisBlogThis!Share to TwitterShare to FacebookShare to Pinterest
Labels: Home, Running