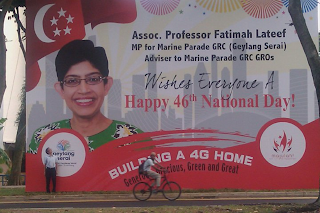 Chanced upon this hilarious picture on Chen Show Mao's FB page. I mean you really gotta give it to the guy man. He's so bloody rich, chose to serve with the opposition and give back to society, and still maintains such a great sense of humour.

His caption was something like Happy 46th National Day from Fatimah and me at Lorong Ah Soo.

Of course all you can see is Fatimah Lateef, PAP MP at the ward across his Aljunied ward, on the billboard which absolutely dwarfs the common man. But you'll see at the bottom left hand corner Mr Chen is there as well!

Talk about Fatimah looking larger than life. Same goes for all the other PAP MPs using these huge-ass billboards to reach out to the masses. So high-handed kinda feeling. That's probably all you will ever get to see of her!

I think that the length of Fatimah's mouth on the billboard is longer than Mr Chen's height. Its huge! :P

Make what you will but it does emphasize the budget size that the ruling party has compared to the opposition, and yet you have to admire people like Mr Chen for bringing such perspectives to our everyday lives.

In fact, you readers should go Like Mr Chen's FB page. The way he utilizes FB to reach out to his fans is unique and grounded. Quite similar to George Yeo.

If the WP continues to bring in talent like him to serve the greater good, there is no doubt that more votes will go towards them in the next GE.

Happy birthday Singapore!
Posted by cylum at 11:25 AM
Email ThisBlogThis!Share to TwitterShare to FacebookShare to Pinterest
Labels: Singapore