Was on leave yesterday. Went to Palm Resort, JB to give my newly bought hybrid a runout. Hit a 119 and it sure felt like I had a pretty lousy game. Think I didn't spend time testing out the hybrid in the range thats why I didn't hit many good shots with it. But of those that connected, boy, it does show some sparkle of brilliance. Must bring it to the range for some practice soon. Was nonetheless real fun and relaxed. Think we took a good 5hours to finish the game with hardly anyone on the course to bug us (except maybe the grasscutters!) 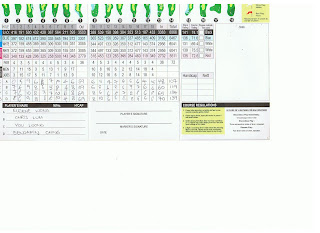 Darn it, missed my IPPT this morning. Had booked it for the 730am slot and woke up like just half an hour ago. Sigh. Gotta rebook and hopefully not get into trouble for this.

And what's all this about Michael Owen's transfer to Manchester United?! Was shocked when I first read about it. But okay, lets be a little optimistic here. For starters, he costs us zero pounds, whole transfer is free. According to Soccernet, his two-year contract is based on an appearance/goals scored remuneration basis. And he sounds like he really wants to make it to England's World Cup squad. So fine lets give him all that.

But still?! I mean. This dude used to be pure Liverpoot-lian! If he had been any better, the press would've compared him to Luis Figo's Barca - Real switch! I dunno but having spent Newcastle's money scoring what? 8-9 goals for them in all his time there? Sitting comfortably on the injured list most of the time? Sucking when he was in Real? His heydays when he was freely scoring for Liverpool and everybody wanted to be him are long gone, mind you. Never been the same since he left.

But lets wait and see. If he's really trying to prove that he's still got it, then perhaps there's no better place than us to bang in those EPL goals. Maybe Fergie knows something the rest of us don't and usually he's gets things right.

Read this for excellent commentary of the transfer.

What's the worst that could happen anyway? Bench him or banish him to the reserves lor. Beats letting him go to Blackburn/Bolton and turn in a top goalscorer next season. AND he might help tide us through till Macheda and Wellback matures.

Oh! And who here remembers that its US Independence Day today?! Happy 4th of July you happy folks over there!
Posted by cylum at 10:51 AM
Email ThisBlogThis!Share to TwitterShare to FacebookShare to Pinterest
Labels: Manchester United, Other Sports, Travel