Spent 2hrs hours yesterday morning drawing this on my room wall! Damn impressed with my own artistic talent. Colouring it will be alot tougher though. That's Man U pride for you! 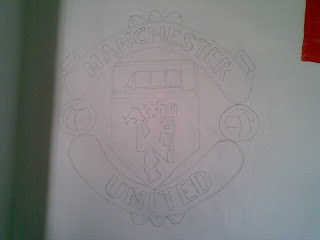 Watched Ice Age 3 last night at Century Square as well. First things first. The movie sucked. Seriously. I hardly laughed one bit. Terrible. Only suitable for kids below 5. We also visited the new Tampines 1 Mall! It actually has a pretty Jap-py kind of concept with alot of Japanese outlets. And we had dinner at this Japanese restaurant called Manpuku which was really awesome! Its really like a Japanese-styled Marche. The food is pretty good, and they cook it on the spot for you. Not very cheap but not extremely expensive either. Think I will come back for more soon!

I just need to rant about the Century Square movieplex for a moment here. I mean I've been going to that cinema since I was in JC! Thats like 13years ago! And all they've done is recently upgrade the handrests from velvet to leather?! The rest is the same! Crap, the seats are still velvet and the theatres are stuffy and hot! And it totally didn't help that some guy with really smelly feet was sitting beside me!!! Argh!!!

Spent most of today at the Singapore Science Centre. In fact most of the time was spent at the Da Vinci Exhibition thats here only for two months. Details most of his works from his scrapbooks. Basically they just use his drawings and build some of the models out of wood. Pretty interesting actually but quite intensive reading for all of his works. And they spent alot of exhibition space on the Mona Lisa. Maybe more write ups on his Vitruvian Man instead would have been nice.

And we also watched this movie short called Sea Monsters at the Omni-Max Theatre. Was crap. Like watching a locally produced Finding Nemo! Hahaha...
Posted by cylum at 9:31 PM
Email ThisBlogThis!Share to TwitterShare to FacebookShare to Pinterest