Wow, it took awhile just to get the pictures into this computer. Cameras these days are abit too high-tech for me. Tried to load them on Facebook but it keeps jamming on me. Darn. 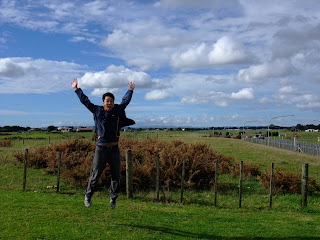 We start heading out of Auckland towards Whitianga. I'm so pumped up right now! 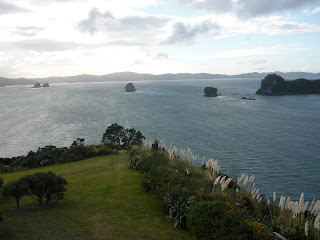 This was in Coromandel, the beginning of our 40min trek down to Cathedral Cove. The cove wasn't especially spectacular but the views from the car park were the beginning of the breathtaking sights throughout the course of our trip. 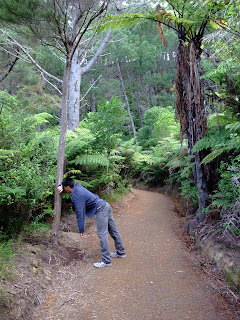 And this was me 15min into tramping... 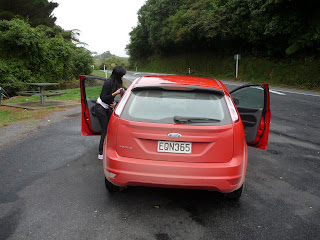 Our trusty bright red Ford Focus during our North Island tour. So early in the trip and it's muddied all over. Served us very well. Wifey is trying to grab her scarf (to wrap around the exposed waist?) because its really windy. 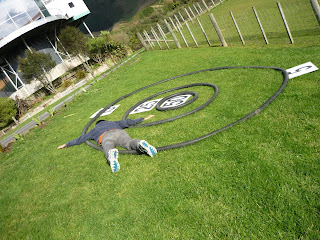 The Swoosh. Its a fun ride in Rotorua where wifey and myself are hoisted on a crane some 40m high and released like a gigantic swing, whereby at the lowest point, we're just ONE metre from the concrete ground. The scary part was while we were dangling for dear life, one of us had to pull the release cord then sent us plunging(obviously it was me). I swear the series of shots leading up to this photo would have exponentially added to the humourous effort. 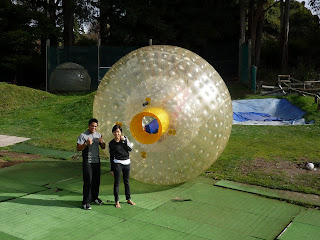 The Zorb. Extremely over-rated and expensive. I have no idea why anyone would pay 50bucks to roll down a hill in a giant ball. All over in 20seconds and I climbed out of that stupid ball feeling pukish. Oh, and wifey is just pretending that the ride's awesome. 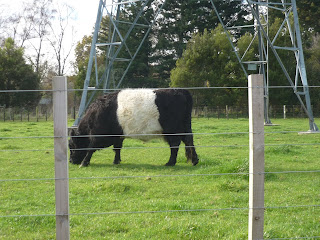 I dunno about you but this animal rates as one of the funniest in our travels. Which part of the "Survival of the fittest" theory did this poor bovine fit in to survive till this day? Camouflage definitely wasn't one of its strengths. Has it been hiding at the zebra-crossings all this while?! 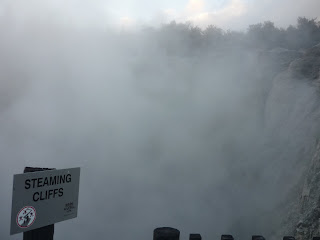 Hell's Gate. Thermal geysers, hot spring et al. The sign says it all. Steaming. Cliffs. All 120degs of it. 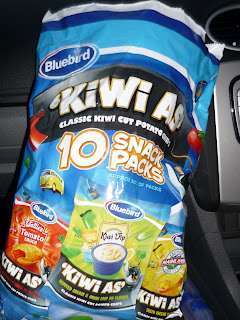 This was a popular brand of potato chips over there. Bluebird. Try saying it in Hokkien. Didn't taste good at all and in fact was quite smelly. 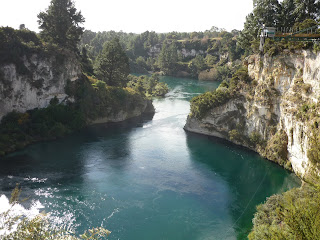 My virgin bungy jump. At Lake Taupo. Freakin' awesome. This is the most popular jump site in the North Island. 47m drop. Jump platform is on the right. There're scarier places to jump, but this was a start. The DVD and photos cost almost as much as the jump itself. Haha. 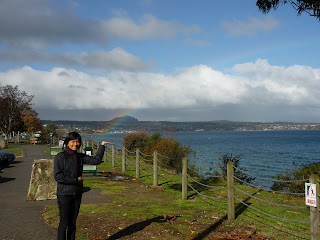 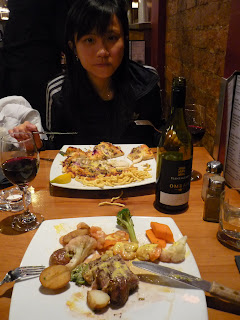 That night we both got high at Stell*r, a swanky restaurant in Wanganui. Good food, good wine, good company. 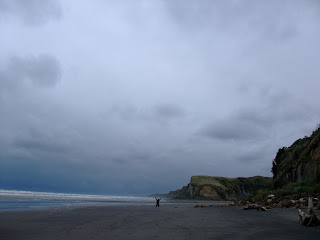 One of the best and surprising sights on our trip. Kai Iwi Beach. Somewhere along the way between Wanganui and Wellington. The crashing waves of the Tasman Sea has caused this erosion of cliffs in such magnitude. Just the awesome power of Mother Nature in full glory. That black speck is wifey, who got so emotional that she ran as far as her legs could take her, until the strong winds blew her back to me :) Took awhile to get this jumpshot right as the winds were so strong. 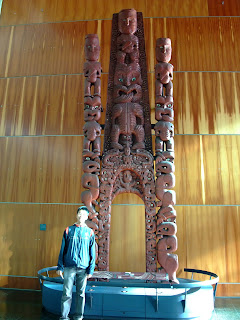 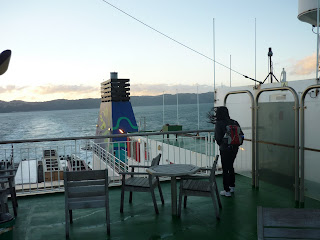 On board the InterIslander, South Island bound! Wifey thinks she's stronger than the wind. The winds are so strong that we cannot stay on the deck for more than 10minutes without getting blown away. Haha.

Going out liaoz! That's it for the North Island. Later tonight will post some South Island pictures!
Posted by cylum at 9:26 AM
Email ThisBlogThis!Share to TwitterShare to FacebookShare to Pinterest
Labels: Travel