Think in total there were 13 of us. A couple of them pulled out because they were too cui from someone's stag party last night I think. I woke up at 6am to catch the 7.45am ferry, after partying hard last night somemore :P

Anyway we were pretty lucky to manage to convince Kaz to arrange for Youlong, Eugene, Benjamin and myself on the same flight (citing that we had a wager going). In the end we decided to challenge over a regular bottle in Dragonfly. It was gonna be Eugene versus the three of us combined, best-ball fashion. This meant that we'd take the best score for every hole and tally it against his, with no handicaps. 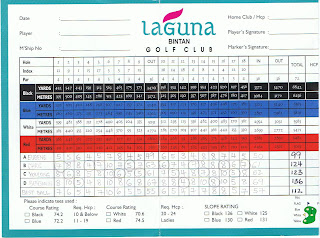 As anyone can easily make out, we got wiped-out by Eugene because he hit his first ever sub-100 score today. Xianz. Of all golfing days he chose today to be at his best. Even with our best scores combined, we still lost by 13 strokers. Haha. Then I also lost to Youlong by a single stroke. Cui. Then again it was a pretty good game for me (by my standards) also lah, so I shan't complain so much.

I'm burnt like a lobster!
Posted by cylum at 8:50 PM
Email ThisBlogThis!Share to TwitterShare to FacebookShare to Pinterest
Labels: Other Sports