The Church And The Old Colonial Home

Spent yesterday morning and afternoon attending Jobeth and Clarence's wedding at that church beside the YMCA (darn I keep forgetting the name). It's the first time I've been in there and it was a really, really nice event! Always loved church weddings because they always come across a tad more meaningful than the standard Chinese ones.

Managed to catchup with a few old faces as well, considering how I've been missing out on some of the recent gatherings. All in all was a lovely afternoon spent. Only grumble was that I parked too far, at the SMU carpark haha.

Then we visited Iluma, the new shopping centre at Bugis. Was really nice and spacious! I'd recomend everyone to drop by there at least once soon because it's still not very crowded. It's a pretty funky place and the part that I like best is the arcade called Arcadia, which devoted more than half its floor area to those spaceship machines? You know, the one's where you control a machine hand that drops to fish out a soft toy? Yeah! There were tons of those machines there. Just like the zua zua le in Taiwan! 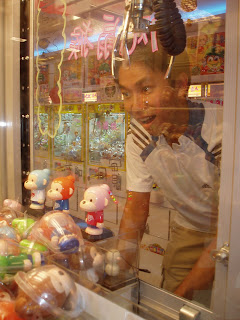 The above was from my Taiwan trip in 2007. Just like that except that me and the wifey didn't try playing it yesterday haha. Another time perhaps!

Evening we went over to Joey's house-warming near Harbourfront. She's got a really nice and huge place there (I seriously mean HUGE). IT's an old British styled colonial home, creeky floors and high ceilings type. Cool stuff, BBQ, beers et al. Although I dunno why I'm still meeting colleagues when I already see them 5 times a week!

This morning we went to this renovated hawker centre at Upper Thomson. I remember ma used to bring me there to by groceries from the Econ Minimart there when we were living in that area LONG ago. It was pretty nice being there and having a chillout breakfast.

Then we went ot Lower Pierce reservoir to catch some fish for my fish tank! Got ourselves about 5 baby shrimp and a couple of little fishies. I think they're all gonna be food for the rest of the fish tank population though. Sigh. Can't wait to renovate our balcony area.

We had crabs for dinner today! At Buangkok! Verdict? Great stuff! No need to travel too far for good crabs any longer! Whoot!

Ok enough of updates!
Posted by cylum at 10:14 PM
Email ThisBlogThis!Share to TwitterShare to FacebookShare to Pinterest
Labels: Home