Ooh ooh! They're out! And as promised, some pictures from our snorkelling escapade! Do note that the pix arn't 5mb-type quality hor, they're just standard Kodak disposable underwater cameras so must discount the quality abit! In total we took over 100 pix and of course there were the lousy shaky pictures, but then there were pretty nice ones too, so below showcases the top 10, in my own humble opinion (i will not give a hoot about yours, I happy can liao :)). 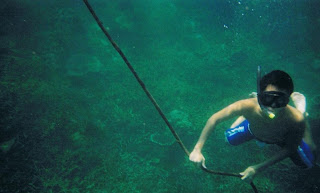 Ok, just for starters as proof that these pictures weren't ripped off some diving website (as if they were THAT good), I had to show everyone my adventurous skin-diving side (fine, I'm not THAT gung-ho lah). I'm actually grabbing the anchor line at our 2nd snorkelling spot which was also a dive spot with pretty good visibility. Current was pretty strong though. 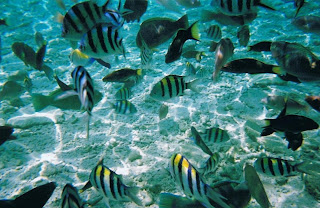 Ok I know what you're about to say, nothing spectacular here, but this picture shows the tons and tons of fish just at the shore! They bug you around as though you were the Muffin Man hoping to catch some scraps off your hands. Most of the infestation swarm (ok at least they're friendly fishies) is made up of Damsels (Sergeant), Parrots, Sweetlips and Surgeons by the way. 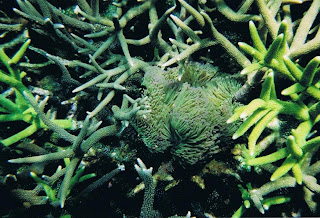 Of course, who can resist looking for little Nemos. But to get right up close and take a clear picture of one isn't easy. You can see Nemo's nose somewhere in the picture peeking out of the anemone. I vividly remember the anemone being a much larger clump than this picture appears. No kidding! 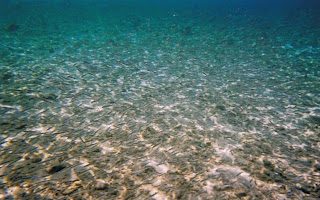 While this looks like another one of those "WTF?!" photos, it is not. These here are Ikan Bilis (actually I'm not that sure) but there were tons and tons of them! All over the place! They hang around shallow waters and hang around in such huge schools that look like shadows. A tad scary sometimes. Strength in numbers. 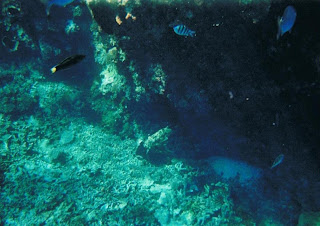 This is the resident Giant Grouper at the Marine Park near the jetty. The mother/friend/protector/bitch of 2 other smaller Groupers chilling out at the giant rock. This photo is out of the top 5 largely due to the difficulty in spotting it. Its right there in the middle. And its much larger than it looks (all divers always say that)! 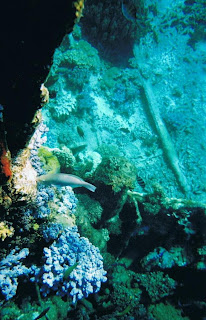 This pops right in at the top 5 because of its nice diverse colour! Taken at the shipwreck at the Marine Park. Current was really strong, dunno how the wifey managed to snap this. And thats just a crummy Parrotfish by the way, ooh and aah at the blue coral instead will'ya?! 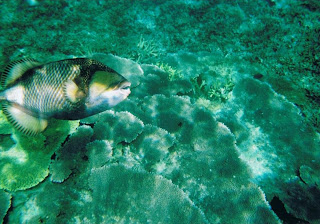 This was the largest occasional Triggerfish we saw. So big and so fast we couldn't get the whole damn thing quick enough. It's known to bite sometimes as you can see from its sharp teeth. Plus it was huge. But it looks like its liking my camera attention. Cheese! 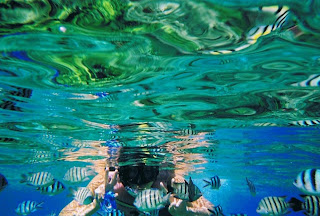 Just because. I'm a sucker for fancy shit that turns out nicer than I envision them to be. I like it so much that its my profile picture on Facebook for now! Whoot! 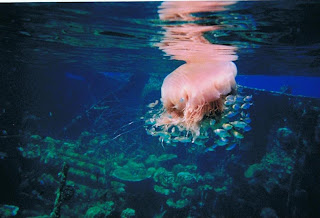 Monsoon's coming, so jellyfish also come in search of warmer waters and nearer to the coasts. This picture has the funkiness of the earlier picture but comes with the pack of little buggers trying to chill out under da'hood. They got balls! 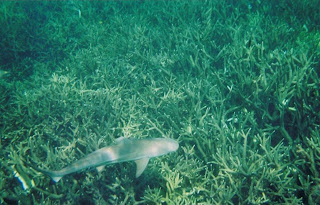 Nothing can beat the picture of a shark taken 3m away in total nakedness other than boardshorts (no undies even!) and snorkel mask! Take that you! But then this is a friendly Blacktip reef shark who wouldn't harm us, until it started swimming a couple of circles below the wifey. That was the signal to piss in the sea and get the hell outta there!
Posted by cylum at 6:58 PM
Email ThisBlogThis!Share to TwitterShare to FacebookShare to Pinterest
Labels: Travel