Just back late last night from Redang, the snorkeller's paradise!!!

Indeed, I had my reservations going up so far north by bus. The 10-hr bus ride + 1-hr boat ride was enough to scare away most honeymooners. Even after the travelling ordeal, we were told that alot of resorts were closed because of the coming monsoon in November. Bummer man, must be no one come that's why. :(

For a moment especially on the first day, my head was filled with thoughts of regret as to how I ended up choosing such a destination and I was stuck in for the next 3 days with extension somemore! Eeks. Even Genting felt like a more enticing destination.

We were soon amazed by the power of snorkelling! We had the intention to dive but then figured maybe we'll go on those cheapo free snorkelling trips first and see if the waters are really terrible and choppy in October. Well lo' and behold the waters in Redang were awesome!

So awesome that we were brought to a few dive spots to snorkel and over there the visibility was so clear up to 15-18m deep! We exhausted 4 disposable underwater cameras in all (spent all our money on those) and saw just about everything on this website including sharks (a lot of them), sea turtles, and giant garoupas!

The underwater pix are being developed as I'm blogging so I'll have to post them later (hope they're nice!) but below is a nutshell of our trip! 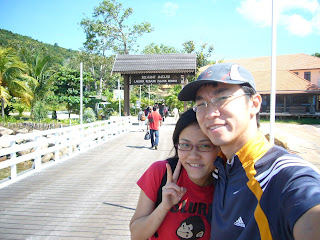 At the jetty entrance of our resort. As you can see, I didn't look very enthusiastic after some dude reminded me the monsoon was coming (as if I hadn't heard that a million times prior). 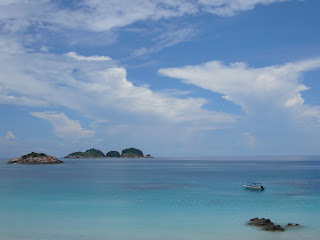 View from the resort lobby. Quite breathtaking really. Enough to hold off the hunger pangs of lunch for at least 15 more photo-taking minutes. 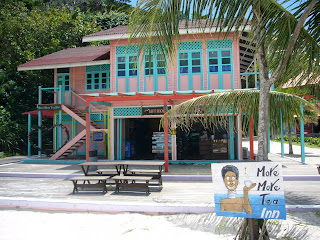 Yes. THAT house from xia ri de mo mo cha starring Sammi Cheng and Richie Ren? The resort was on the actual location of the movie and they didn't hesitate to remind guests of this by devoting an entire TV channel just screening reruns of that movie. I think I watched it like 5 times. Brrr....check out Guang Liang (of Tong Hua fame) in choppy hair! 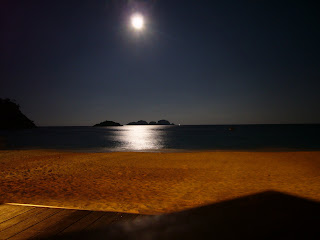 We were blessed with extremely good weather while we were there. The only time it rained was when we were on the bus back to Singapore. That's the moon, bright as a blazing torch lighting up the night sky. Lovely. 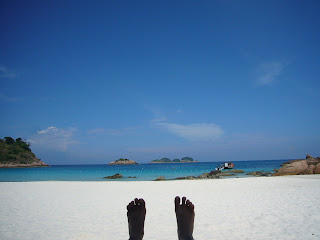 Me, chilling on the beach. NEVER fall asleep while having a tan. You will regret it. Seriously. 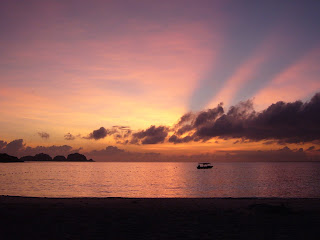 And we woke up just to catch the sunrise! I think the last time I did that was like 10+ years ago. Awesome stuff. Too bad I was erm...drifting in and out of sleep on the deck chair! 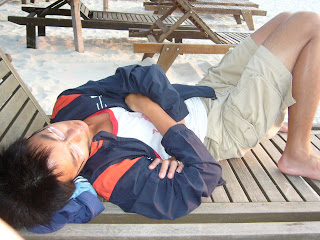 Cui, sleep so sneakily also can get caught! Argh! 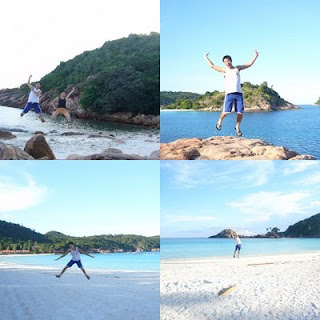 As you can see, my cheesy obsession with jump pix was never abated. Rock on! (on rocks -_-" hehe...) 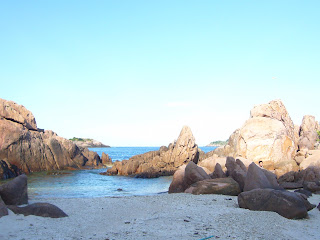 All in all it was a really fun trip. Totally chill and away from the bustle of our urban lives. I may never go there again (because the journey is simply too arduous) but if you haven't been there yet, do make at least one trip up north to see for yourself that the waters in Redang are a few notches above Tioman.