Yesterday afternoon, the wifey and I went to Sakuraya FishMart in Parkway Parade for our WFH lunch. It was a good meal but after that I began to feel a pain in my stomach that was a type of pain I have never felt before.

It was a bloating dull pain in my lower stomach.

I thought it could've been some constipation-related issue, and was hoping it would go away after a while.

There was bloatedness, inability to fart in entirety and the dull pain started shifting to the lower right of my tummy.

In the evening I even asked wifey to help me rub oil on my tummy. Like one of those baby rubs that help babies burp/fart.

It didn't work and I thought perhaps I'd sleep it off.

So this morning I woke up and found the pain still there. It was not worse but it was there.

I've had quite a few friends get it before when they reach around 40, so I kinda knew what to expect.

While sending the son to his football class, I researched a little bit more about the symptoms and confirmed that much of it described what I was going through.

So I made the decision to ask wifey to send me to Parkway East Hospital to check and admit myself in if needed. This was around 9.30am this morning.

The wifey dropped me off and I got through the standard COVID-19 check-ins, and headed straight to the A&E. Luckily today is the eve of Singapore's National Day, so it wasn't very crowded. I got to see a doctor fairly quickly, described my findings, she did her own checks and concurred. And referred that I get warded and be seen my a surgeon plus a CT scan to confirm.

I was admitted and got my ward at around 12pm. As I had two small delicious porkfloss buns made by wifey early in the morning, I had to fast for awhile before the CT scan could be done. Hence, it was nuahing and resting in my ward until 2pm before I could do anything. I was placed in a double bedded ward because the single bedders were full. It was not too bad actually since the other guy moved out at noon and I now have the whole room to myself. Also updated my family so they'd be informed.

Also had an assigned nurse named Donna from the Philippines. She as really nice.

Also was lucky that the in-house surgeon for the day was the perfect guy to do surgery, so I didn't have to wait too long. His name was Dr Charles Tsang. I read up about him the moment I was assigned and he had a good reputation. In person, he was even nicer. Kinda explained what needed to be confirmed and subsequently what needed to be done.

If confirmed to be appendicitis, I'd have to have surgery to have my Appendix removed. This was a simple procedure which he was VERY GOOD in, it seems. And going by his external checks, he said there as a 95% chance it was a standard and simple Appendix removal procedure and I'd be out of here in a day. There was the 5% chance that things were more complicated, possibly Cancer-related and I'd have to be warded for a week at least for tests etc. That would be BAD.

Mum and bro came by to see me. Was really nice even though I didn't want them to. Hospitals are not a good place to come to in this current COVID-19 situation. I did ask and Parkway East Hospital does not hold COVID-19 patients more than diagnosis phase, which is a good thing I guess. They only allowed two visitors each time, including kids. So the wifey couldn't catch me in the rush, but managed to drop off my phone chargers WHICH ARE SO IMPORTANT.

At 2pm the nurses asked me to go for my CT scan, which was in the Radiology department. This is like those cancer scans, one huge Stargate-styled circle remoted to move in and out to get the best x-ray possible. It was quick and fast. In fact the wait to use the CT scan machine was a lot longer than the scan itself, as is always in hospitals and the army, wait to rush only to rush to wait.

Dr Tsang has already said since he is 95% sure it is the standard Appendix removal, he'd get the Operating Theatre (OT) ready for me by 3.30pm.

By 3pm I could hear him outside (somehow they left my ro0m door wide open) asking for confirmation of the scans. So it was around 3.20pm they confirmed it was routine Appendix removal (BIG PHEW!) and I was quickly wheeled to the OT. Parkway East Hospital was 4 OTs.

At the holding area before the OT, I was prepped up by an army of nurses. I can easily count more than 10 people involved in my surgery aside from Dr Tsang himself. There was a nurse in charge of transferring me to the OT, which was two floors down. Nurse Donna herself accompanied me (so nice of her). I was in a really cheery mood so I chatted with many of them and asked about them. I really respect all these essential staff so much, no matter which countries they come from.

There was Apple, the prep nurse who prepared me before the OT. There was nurse Lim, who was going to be my head nurse going into the OT and throughout the surgery. There was Dr Jonathan Tan, my local anesthetist. He said he would put me to sleep :( FUNNY. No he was very nice though. Also a lot of others helping set up the OT, transfer me bed to bed etc.

In fact, up until I was put to deep slumber, I never saw Dr Tsang at all...weird.

nurse Apple was doing her stuff right next to me. I was rather happy to see her even in my drowsy stupor. Cannot really describe how important it is to see a familiar face at first sight. Helped that she was cheery and chirpy too. She comes to Ilo Ilo in the Philippines.

We had a brief chat about how the procedure went and it was good to know that all went well and was a success. Nurse Lim also came over once she knew I had come to. Think there was a lot of administration to be done because I was in the OT prep area again for a fairly long time. Even Nurse Donna came over to tell me my mum told her to inform her when I finished my surgery. Haha. Every mother is always worried about their children no matter how old. So loved and blessed.

Anyway by the time I got back to my ward it was almost 5.30pm already.

First thing was to check my phones. Crazy amount of messages as I had posted on IG Stories some of the day's details.

Updated the family with pictures etc. I think everyone was generally relieved lah.

Immediately the wifey and mum wanted to come over. So they had to take turns. First it was Mum and Wei. Nice to see the boy, he looked shy to say much. Then it was wifey and Xin. Xin was more chirpy to see me and asking me a whole load of questions. It was really nice to see all of them post-surgery. At least there was relief in all of us.

At this point I need to mention that since the TWO SMALL BUNS I ate before 9am today, I have had NOTHING to eat, and hardly had anything to drink. Because I needed to fast prior to surgery. Therefore at this point Nurse Donna says I can eat liquids. At first she was like, clear soup ok? I was so hungry I asked if there was porridge. So luckily she checked and allowed it. And chicken porridge AND clear vegetable soup was served. I wolfed it down so fast that Xin was gasping in shock. Haha.

Since there was a lot of waiting here and there, they didn't stay too long. So by 6+pm I'm all alone in the ward liao. It was nice though. Just doing nothing, resting, playing with my phone. I had my laptop and iPads with me now as well, which was all I really needed.

And since then till now almost midnight, that's all I've been busy with. Online everything.

Here are some pictures: 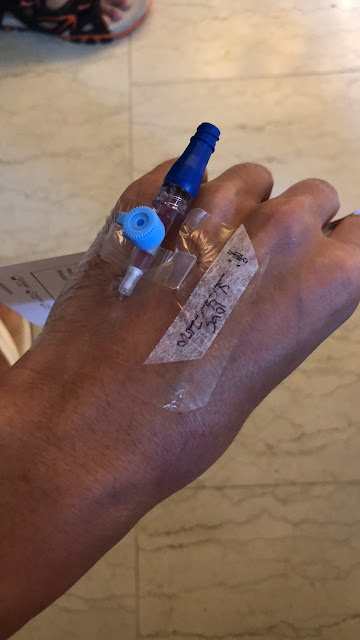 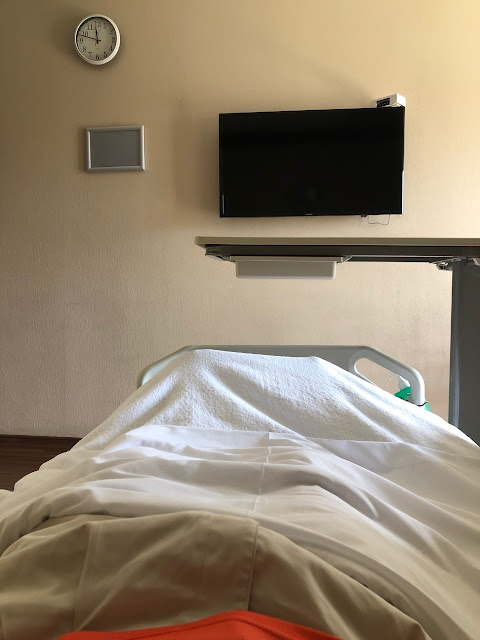 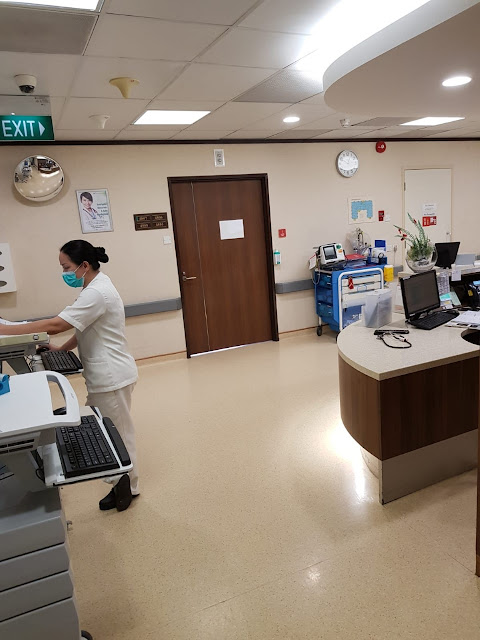 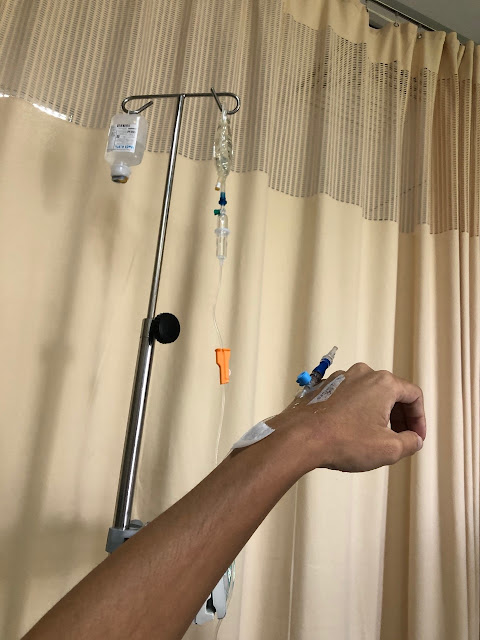 Posted by cylum at 11:22 PM
Email ThisBlogThis!Share to TwitterShare to FacebookShare to Pinterest
Labels: Health